Awesome Iceland Update as at 2018

Well.................5 years later we returned to Iceland.  What a change.  Entirely different now.  Weather worse than ever imaginable and we had planned to drive to the limit of our last trip along the south coast to start exploring further.  So we drove straight out of Reykjavik and all the way to Vik.  Here's a map of where we went this time.  Bear in mind that this was a 5 full days trip so many miles have been covered.  Most short tours don't even get as far as Vik.

We left the main road to have a quick look at the Reynisfjara beach across the lagoon (just short of Vik) as we were passing - gone was the dirt track with ice lapping at either side - now it was a two lane tarmac road with coachloads of tourists, a cafe on the headland and all the edges of the cliffs roped off.  SO disappointing.................... but then it is a stunning spot and tourism was bound to find it eventually. We just didn't realise that they hadn't found it yet, back in 2013. We were so horrified that we didn't even get out of the car. 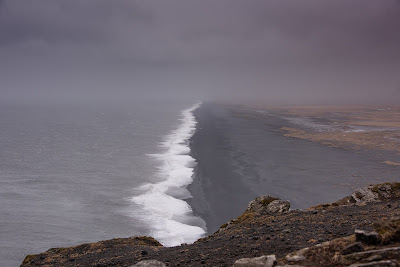 We drove up the rough track to the Dyrholaey lighthouse, by which time the weather was hurricane force wind and horizontal rain.   So bad that it did occur to us that our 4wd vehicle might not stay in the car park.  We tried to make the short trek to the lighthouse holding onto some ropes against the weather, but decided that it was pretty dangerous up there and headed back.  Two of us were required to open a car door to make sure it didn't get ripped off its hinges by this time.   Weather getting worse!


This is the view from up by the lighthouse looking west along the coast.  It's hard to tell exactly how grim the weather was from this.......not many pics taken, needless to say.

We then headed back to the main road, and down the next road right, down to Reynisfjara beach itself with the basalt rock formations.  Again, cafe in car park, coachloads of tourists etc etc.  Wind now so strong that it's picking up stones and sand and hurling it at us.  Still coachloads of tourists, on a coach tour presumably, determined to get that selfie with the selfie stick whilst being stoned alive with a hundred other people.   Note to self here.......selfie sticks in a crowd not good, selfie sticks in a hurricane not good either.  You had to feel sorry for them though as this was their only chance.  Pretty unpleasant. 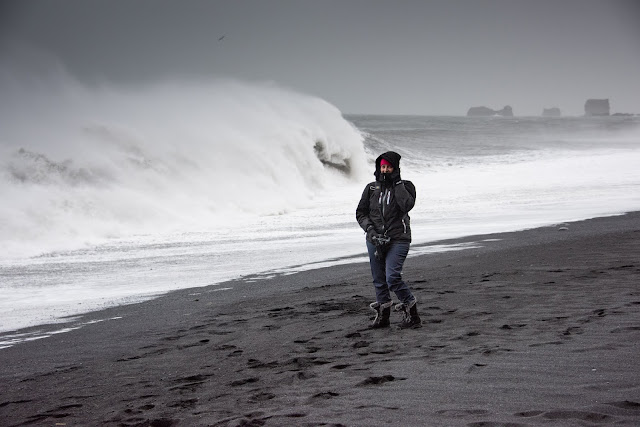 So, not in any particular order we headed off further East along the main road, past our farthest point reached before on the last trip.  Weather came and went, more came than went to be honest, but the landscape around each new headland was always different every time: 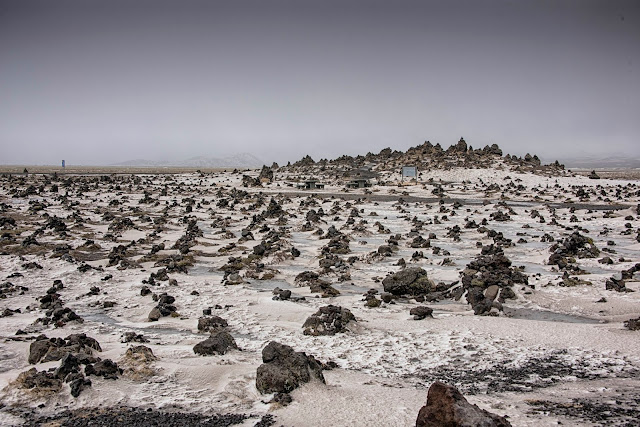 Weird little heaps of lava rock amongst the snow/ice.... 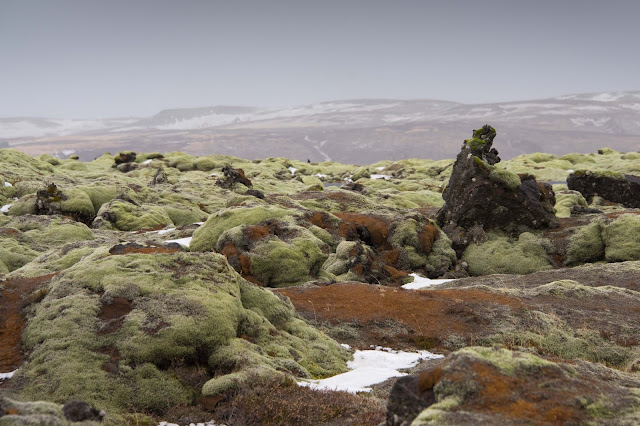 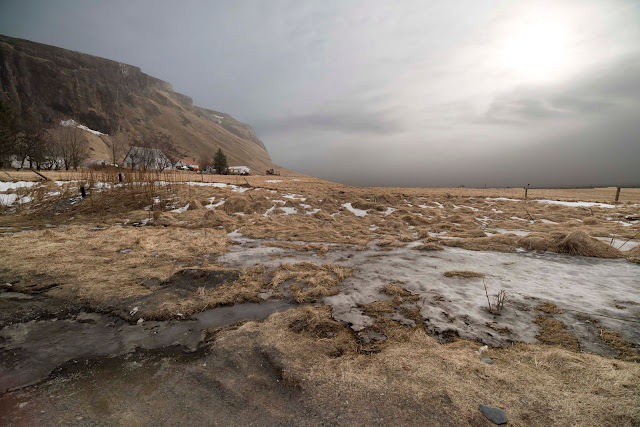 Then we encountered a black desert landscape with an impending sand storm...... 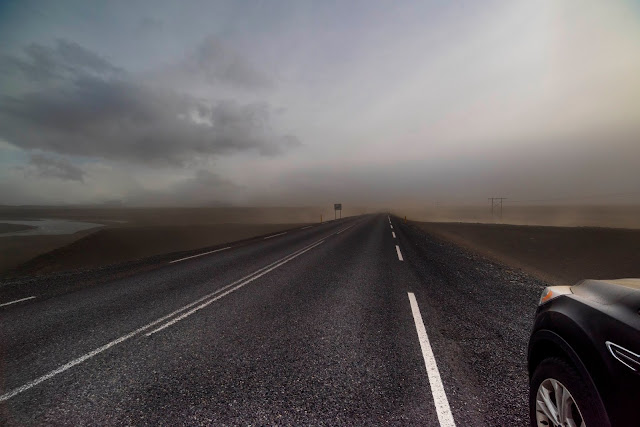 We were warned on picking up the hire car that damage from sand storms to the paintwork was chargeable...............yikes!  Luckily it wasn't as bad as it could have been, but you still wouldn't want to getout of the car into it..... 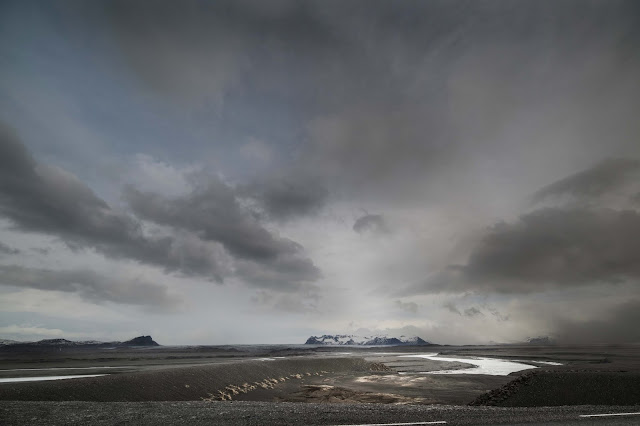 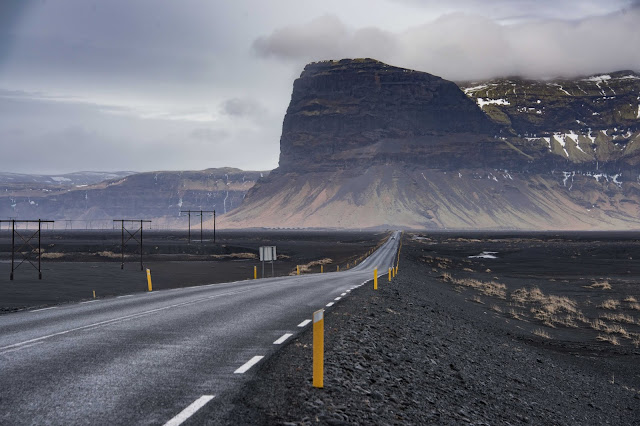 What most people maybe don't realise is the vast expanse of nothingness that is encountered here.  Interesting nothingness, but miles of it.

Nearer along to Hof, we headed down an extrememely potholed but quite wide dirt track to Svinafellsjokull Glacier.  Now this is much less on the tourist track, hence no tarmac (yet) but is quite amazing up close even when, yes, still raining quite hard. 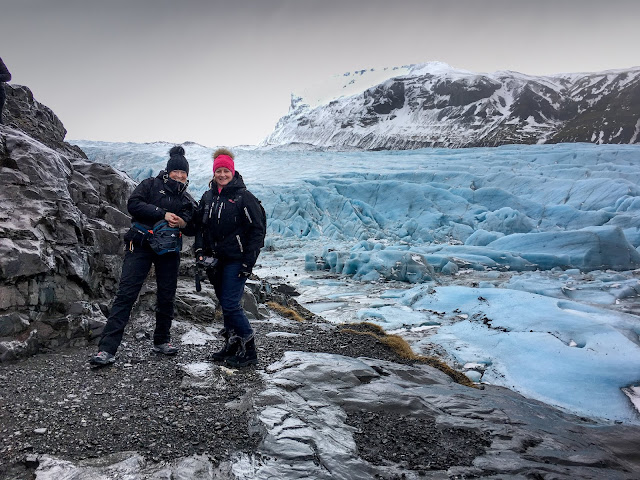 We continued all the way along the coast to the Jokulsarlon glacier lagoon in the hope of seeing icebergs on the black beach and had a night photographic guided trek to an ice cave planned.  This wasn't to be as the weather was so bad and snowing by this time that the trek was cancelled and although we got to the lagoon, there were no icebergs and really not alot of visibility either so we changed our plans and headed back towards home again having switched our hotel stays around also.  Very disappointing as this was what we really came to see.  Just unlucky I guess, which is how Iceland can be, so be warned.

Heading back past Vik again, and we decided, regardless of weather (still raining a fair bit) that we would trek out to see the plane wreck at Solheimasandur.  It starts like this.........where is it? 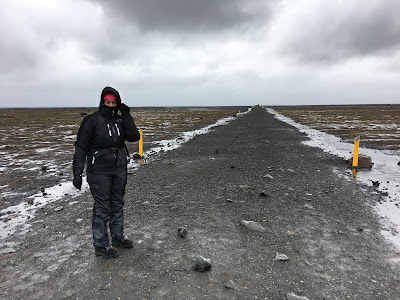 but here's what I came away with..... a stacked image to lose the tourists busy etching their names into the side of the plane(!!) and any quad bikes kicking around that some people must've hired somewhere (who knows where though). 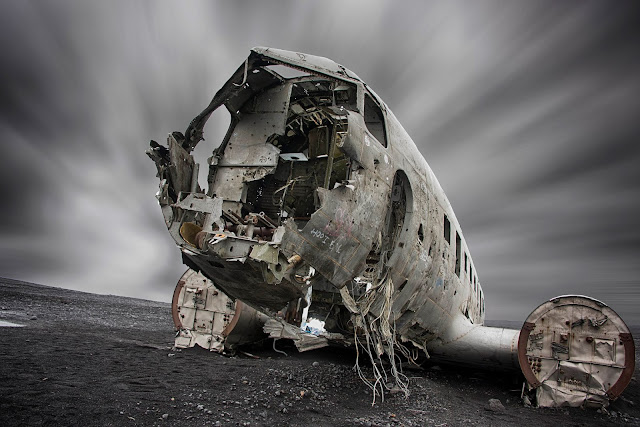 Not something you see every day and not much left of it either.  It crash landed in 1973 and bits have been going missing ever since.......

Me trying to dry off the camera storm covers in a brief lull in the rain.  Gill and I at the Plane wreck. 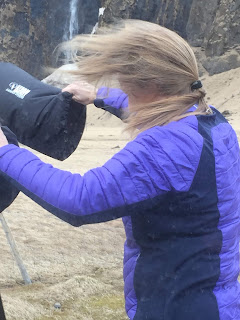 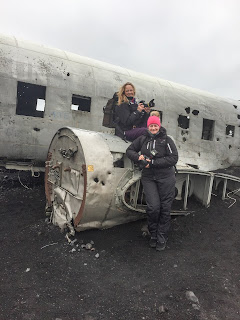 Finally heading back from the wild west and wild west weather (is that normal? I don't know),  we had a spare day on our hands so dropped in on Skogafoss and Seljalandsfoss (as we were passing, and they're right by the road), only to find that the car parks are chargeable and they are both fairly roped off now due to too many tourists. 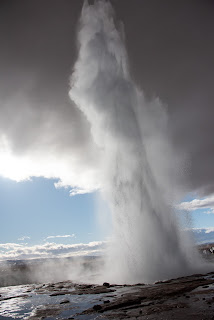 We then revisited Geysir.


Not very much has changed here as there was always a big cafe and shop/car park/tourists etc.  Geysir still erupting every 7/8 mins.  Still spectacular, and the weather had finally improved.... 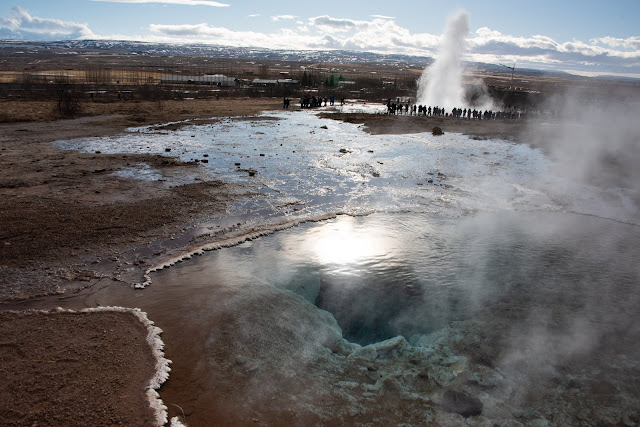 In this area, not far is Faxafoss, yet another waterfall. 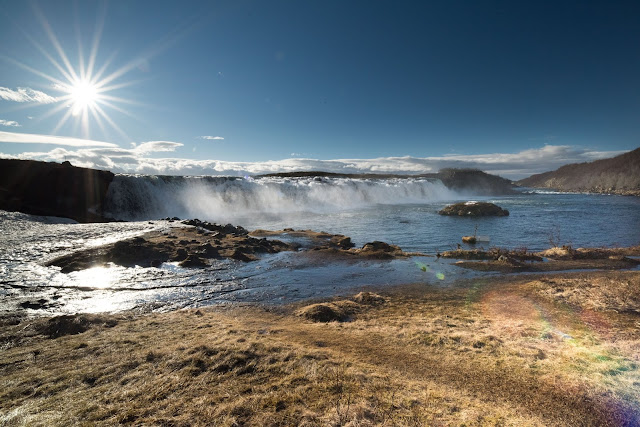 Now we're just listing waterfalls..............you get a bit waterfalled-out after a while but they're all different and all beautiful in their own way. 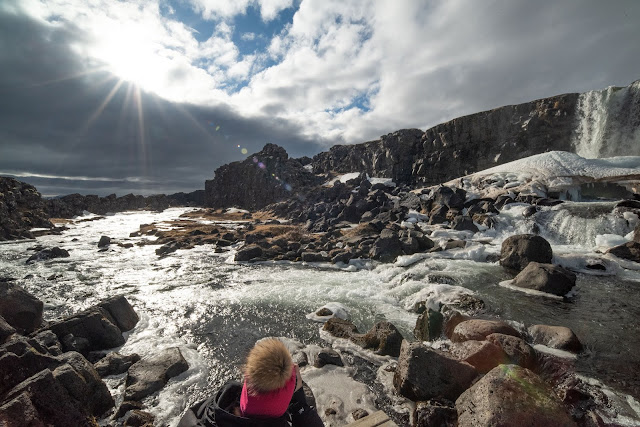 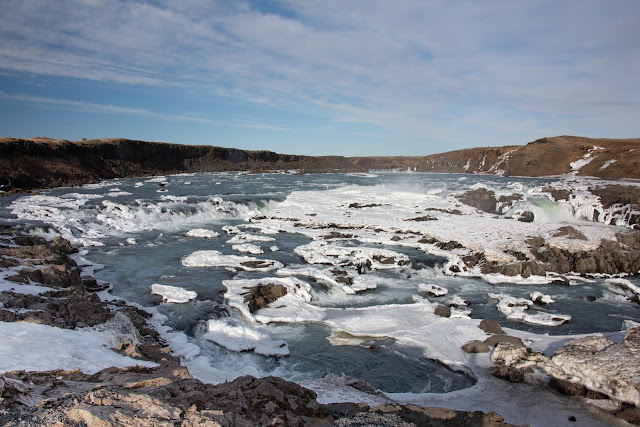 Solheimajokull Glacier - where quite a few glacier treks go to.  It was hammering down here and Gill didn't even leave the car.  I braved it for 10 mins to take a quick panoramic set with a phone, and I got soaked!

SO there it is - another Catchlight trip blogged for the record, although far from a great one due to the weather, but what can you do?  Iceland is a beautiful place and quite colourful in the sunshine, but mostly shades of dark grey otherwise and only for the severely weatherbeaten and determined.......

In 2013, you had to plan where to get the next lot of fuel/food/hotel way in advance (a year ahead mostly) as they were extremely few and far between and one could easily be stranded in bad weather, but by 2018 much of this has changed.  Now one can book a last minute flight/hotels etc.  There are hotels appearing everywhere.  The Fosshotel Glacier Lagoon we stayed at near Jokulsarlon (very nice it was) was not even on Google earth view from the road so it was new.  Where to find lunch is now not a problem mostly whereas in 2013, if you didn't take it with you, you went without.  The downside is that there are 100-fold (no exaggeration) more tourists everywhere you go with cafes and car park charges and ropes everywhere too.  Ah well, it's still worth a trip, just don't expect it to be all to yourselves anymore.
Posted by Tessa Simpson at 11:21 No comments:

Go back to our homepage:

Tessa Simpson
Event Photographer. Mad about photography - always have been. Favourite shoots are always at night, out in the dark, with my torch.